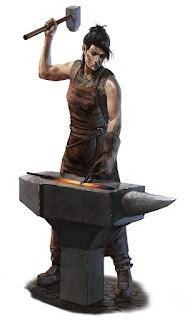 Crafting items is handled relatively simply in 5E, where as a downtime activity, you can craft up to 5gp in value per day, spending half of the crafted object's cost in materials.  Sounds easy, right?

So a dagger?  You can make that in an afternoon.  A longsword?  That'll be 3 days.  Perfect.  Now what if you want to make a chainmail set of armor?  That's 15 days.  We're stretching it a bit here.  Plate would take 300 days, definitely too much.  Things start breaking down at higher values, when you get into jewelry, magnifying glasses, or other high value items.

By slightly tweaking the downtime for Crafting Items, by adding in the ability to add apprentices or helpers, and exceptional workspaces or tools, you can take an established master craftsman and differentiate him from the wandering tinker.  Extrapolating that out to magical items as well, you can make a magic item in weeks or months rather than years if you are dedicated to the idea of forging a magical sword.

Crafting Items
You can craft non-magical items with the appropriate tools you are proficient in, with an appropriate workspace at 5gp per day, spending half as much in materials.  If you have assistance from apprentices, helpers or other individuals you may construct an additional 5gp per day per person, as long as they have tools and are proficient in them.
Exceptional workspaces or tools may also increase the rate of construction.
While crafting, if you are selling your crafts rather than building an item to keep, you can maintain a modest lifestyle without having to pay 1 gp per day, or a comfortable lifestyle at half the normal cost (see PHB chapter 5 for more information on lifestyle expenses).

Crafting Magic Items
You can craft magical items with the appropriate tools and workspace at a rate of 25 gp per day, spending that same amount in materials.  If you have assistance from apprentices, helpers or other individuals of sufficient level you may construct an additional 25 gp per day per person.
Exceptional workspaces or tools may also increase the rate of construction.
Magical item creation involves a great deal of experimentation and is not horribly efficient -- however, if you have a formulae for the item in question, the crafting rate is increased by 25gp per day, without having to spend beyond the original amount of materials.
Of course, it's assumed that the craftsman has the basic tools needed to perform the crafting, all of which can be found in the PHB, bu to complement the base crafting rules, here's some example equipment I added to my campaign, as examples below:

Smith's Forge (Common, 50 gp): An anvil, forge and set of tools that allows a proficient user the construction of simple metal objects at a rate of 25 gp per day.

Taking it a bit further, you can establish feats that increase the ability to craft.  With 5E, these feats need to be impressive.


JOURNEYMAN
You have gained increased skill with a craft or a skill, and can use it to great effect.  You gain the following benefits:

* Choose a skill or set of tools.  You gain proficiency with the chosen skill or tool, as well as expertise, granting double your proficiency bonus for any ability check using it.

* Increase the ability score that uses the chosen skill or tool by +1, to a maximum of 20.

* When crafting mundane or magical items, you may craft them at a rate of an extra 5 gp per day.

* When crafting magical items, your character level is considered one higher.

MASTER
Prerequisite: The Journeyman feat
You have reached the pinnacle of your skill with a craft or a skill, above most others, becoming legendary in your abilities.

* Using your Journeyman feat and chosen skill, you always have Advantage on your chosen skill or set of tools.

* Increase the ability score that uses the chosen skill or tool by +1, to a maximum of 20.

* When crafting mundane or magical items, you may craft them at a rate of an extra 10gp per day, which stacks with the benefits of the Journeyman feat.

* When crafting magical items, your character level is considered two higher, which stacks with the benefits of the Journeyman feat.


So take your broken sword to the local farrier and he can probably fix it in a day with the help of his apprentices, the archer can make arrows in the wilderness in the evenings (assuming his purchased materials were arrowheads and fletching), and the wizard could spend the months between adventures crafting his wand to assist him in further delves.

at December 19, 2017
Email ThisBlogThis!Share to TwitterShare to FacebookShare to Pinterest