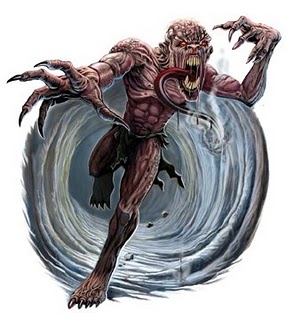 So, running my players through the DCC module, Doom of the Savage Kings, inside a dungeon they encounter ‘tomb ghouls’, undead shambling humanoids that when defeated, burst open and gestated, murderous undead worm things attack.  It’s creepy, and different, and to me, a great take on the standard D&D ghoul.  I absolutely loved this monster, and decided these would be my ‘standard’ ghouls in my campaign.

So, in gearing up to run the Barrowmaze and populate it with creepy, weird undead, the next question I had was, if those were going to be my ghouls, what were my world’s ghasts?  I decided to make them stable symbiotic tomb ghouls with some funky paralysis abilities to not stray too far from the AD&D ghast I knew and loved.

Lastly, in my long and convoluted gaming history, I loved reading about the White Kingdom, and greater ghouls that would on occasion pass for human and sneak about in dark alleys of civilization, so I added ‘barrow ghasts’ to my personal bestiary.

Here you go – make use of this as you would like!

Ghast: A ghast is a ghoul that has gestated a ghoul serpent within itself, and rather than it bursting forth, it has created a symbiosis with the host. Approximately 1 in 4 ghouls successfully mature into a Ghast. Ghasts have needle like teeth and serpent eyes, and long forked tongues.
Init +1; Atk claw +1 melee (1d5); AC 6; HD3d6 (11 hp); MV 25’, climb 25’; Act 2d20; SP un-dead traits, darkvision 100’; SV Fort +1, Ref +0, Will +1; AL C.
The foul bite of a ghast inflicts paralysis on the victim if they fail a DC 11 Fortitude check, as well as necrosis if they fail a DC 8 Fort save.  Failure on the first save means paralysis for 1d6+2 rounds, and failure on the second means taking an additional 1 hp damage per hour as the dying flesh rapidly rots. The necrosis continues until the original wound is magically healed or the target dies (rising as ghoul upon the following dusk).
Barrow ghasts have additional vitality (7 HD, 37 hp, SV Fort +2, Ref +1, Will +2) and a more vital coloration to their flesh, allowing them to masquerade as a human in dim light or with a cloak wrapped around them.


at January 20, 2018
Email ThisBlogThis!Share to TwitterShare to FacebookShare to Pinterest