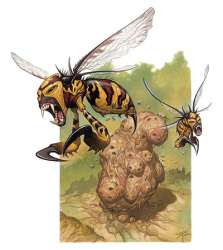 I want to like the stirge, really I do – but in pretty much all the illustrations I’ve seen over the last 40 years, it just comes across as a big, derpy mosquito.  That’s not scary, that’s just a pest.  After seeing the prehistoric locust swarms in the movie Jurrasic World: Dominion this week, and recalling the Black Company stories involving bald hornets, an idea of how to adapt the idea of a stirge being a blood-sucking flying creature that is dangerous in numbers to something more threatening came to me -- so I’m going to re-skin the concept as a Graelwasp for my campaign world.
At the heart of it, regardless of the name change and description, it’s still a stirge fulfilling all the requirements of a creature to harass player characters, regardless of their level, armor, or weapons, and I based the stats on the AD&D stirge entry – I gave it an AC of 12, Move 15’, Fly 80’, HD 2d4 (5 hp), and blood drain, of course.  I made it a little more interesting, drawing on the mythos of the stirges namesake the strigoi, and all the camp lore I've lived with about mosquitos… A lone graelwasp is likely hacked down by one or two blows from a player character, but odds are their swarm-mates will latch on and start doing horrible things to the party’s Stamina attributes…
Graelwasps are native to the rough Graelin plains to the north, but can sometimes be found from southern migrations in Aquerria, typically being found in long grasses, tangled forests, or cave entrances, in swarms of 3d10.  These insectoid creatures are of phenomenal size, being nearly a foot long and has four wings, and razor sharp mandibles that hide a probiscus that can unfurl to draw blood from an open wound.  In large numbers graelwasps can render a fully grown Gunder, oxen, or adult human to a withered corpse in under a minute.
These insects cannot stand the smell of garlic, and garlic oil or freshly crushed garlic will repel them.  They are also are used to colder climes, and if exposed to prolonged heat, they become sopoforic (50% chance of losing their action each round, except to land if flying).

at June 23, 2022
Email ThisBlogThis!Share to TwitterShare to FacebookShare to Pinterest