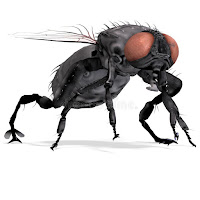 So I have my monstrous tome of Dwarrowdeep – it’s nearly two inches thick, and I could bludgeon a halfling to death with it – reading through it, I’m really impressed, and I’ll be dropping this megadungeon into my DCC campaign world.  Which of course means converting some of the monsters …

While I am still focusing on Barrowmaze monsters, I’m adding to the hit list Dwarrowdeep monsters I think would fit in my world.  One that caught my eye is the giant carnivorous fly.  It’s a Labyrinth Lord monster, but pretty basic – it’s a really big fly.  That’s dull, isn’t it?

I was driving to work the other day, thinking about flies … they tend to swarm rotted food, corpses, and the like, sucking up nutrients, and generally being annoying.  Flies buzz around you, generally being more annoying than a real danger, but here in Canada, we joke that if you go up north in the summer, horseflies are big enough to carry you away, and when they bite, oh my lord, you know it.

So my world of Aquerria had a giant battle of Law versus Chaos, and everyone left is living in the aftermath – so, what about flies swarming the battlefield, metaphysically speaking?  Flies that subsist on chaos and corruption, rather than offal or rotten fruit.  Make them big, giant, annoying, and very specific in what they attack … that will make them memorable to players …

Below is my unique monster, the Giant Taint Fly … feel free to use it, and let me know how it works out in your game.  Drop me a line any time at archadethered@gmail.com.


Giant Taint Fly
A giant fly nearly a foot long, coloured iridescent purple with black markings.  These flies are not native to Aquerria, but came here after the battle of Law versus Chaos, and can be found anywhere that Chaos has left it’s mark – battlefields, subterranean caves, ruins, or even where Chaos influences the world – wizards’ towers, temples to unspeakable powers, and such.
Taint flies are drawn to chaos, and will only attack creatures with corruption, spellcasters, creatures with a Chaotic alignment, or possessing items that have a Chaotic bent.  They consume flesh and blood influenced by chaos with a fearsome and painful biting attack.
As these creatures are the bane of wizards everywhere, they have discerned that these vermin detest certain sounds, and will set up wind chimes, or other contraptions in their homes to keep taint flies from bothering them.

Giant Taint Fly: Init +2; Atk bite +2 melee (1d4); AC 16; HD 2d6 (7 hp); MV fly 30’; Act 1d20; SP attracted to chaos, detest the sound of metal on metal, distracting; SV Fort+0, Ref +6, Will +0; AL C; Crit 1d3/DN
Taint flies will only attack creatures with corruption, a Chaos alignment, or in possession of an item with a Chaotic alignment.
When encountered in numbers, Giant Taint Flies are distracting.  If four or more giant taint flies are within 30 feet of any creature, they suffer -1d to all actions while they are distracted by the buzzing, proximity, and general annoyance of these creatures.
Infused with Chaos, anyone bitten by a taint and a critical strike will suffer effects of the Demon Critical Hit table.

at July 04, 2022 No comments:
Email ThisBlogThis!Share to TwitterShare to FacebookShare to Pinterest
Older Posts Home
Subscribe to: Posts (Atom)