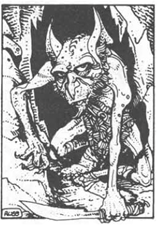 Next up on the parade of monsters for my Greyhawk Temple of Elemental Evil game – goblins!

Goblins are nasty little ankle biters, and have been imagined in multiple books and movies – I wanted to make them uncomplicated in hordes, simple to run but have some sort of extra effect that makes them dangerous in numbers.

I was inspired, of all things, by two things – the monstrous gargun of the Harn campaign setting that has the orcish creatures living in insect like hives, and the movie Priest – the vampires in that also live in hives created from their own excretions.  Adding to that an acidic sweat that can be used to build things, making them primitive scavengers, and creating a goblin queen that is massive creature at the epicenter of the hive that would be a formidable foe for low level adventurers, and there we go!  Making them different from other monstrous humanoids by their primitiveness and hive-like culture would make them a completely different encounter from say, orcs or gnolls.

Also, from a game mechanic perspective, giving goblins a viscous spit attack that has to be scraped or burned off, these tiny creatures can create stress in an encounter – and add a ranged attack for the back ranks …. 1 hit point burning every round is a threat, even to high level characters.

Thoughts, ideas, comments, horror stories from your game using these little beasts?  Drop me an email, at archadethered@gmail.com.

Small disgusting creatures that dwell in swamps, dank caves, and other foul places, they stand about 3’ tall, have bulbous eyes, needle-like teeth and extremely long tongues.  Goblins live in collectives, and worship their queen.
While goblins have no sense of craft, they do scavenge clothing and tools from victims, and covet shiny weapons and objects, to wield and makes themselves appear fearsome like their enemies of mankind.
Goblins are able to secrete and acidic material that can harden, which they use to line the floors and walls of caves, or build crude huts or similar constructs.  They can also spit mucus as a defensive reaction if cornered.
Goblin tribes of a significant size may have a singular goblin queen – a creature that is fed by the tribe, which grows to massive size.  A goblin queen is ponderous, but has a gigantic maw, and constantly secretes an acidic sweat, which goblins gather to ever expand their hives.

at November 20, 2021
Email ThisBlogThis!Share to TwitterShare to FacebookShare to Pinterest