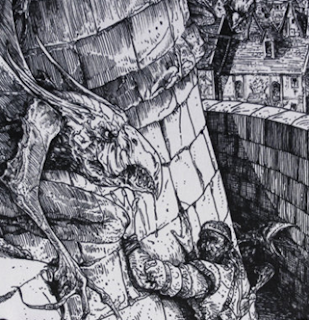 So, next monster in the ‘needs to be more interesting’ category is the gargoyle.

The base gargoyle in the DCC core rulebook and in the original Monster Manual is a flying fanged beastie, with a little weapon resistance, a little hiding ability, and that’s it.

So let’s make a reason for gargoyles to exist … so in our world, gargoyles are carved into churches and architecture … why?  Some books say they were carved into churches to ward off evil spirits.  Well, in D&D, gargoyles are evil … so what makes them evil?  What motivates them?  Lets say that the original race of gargoyles were forsaken by the gods themselves, cast out for some ancient crime.  Now churches of all alignments use carvings of these gargoyles as sentinels or warnings to others not to cross the gods – but sometimes they come to life, fueled by something, maybe the curse of their progenitor race, maybe the displeasure of their gods or maybe the sins of their congregations.  In any case, they are inscrutable to clerics.

While I am at it, let’s make three varieties of gargoyles, and lets fix the fairly arbitrary protection from non-magical weapons in the core rulebook to something a little more stressful/interactive/fun for players.